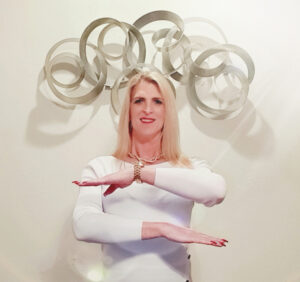 As an inclusion trainer and consultant, I am often in spaces where gender equity is being discussed. But I’ve noticed that many times the conversation is limited to equity for cisgender women. Where are the experiences of my transgender sisters in these conversations? Why are our concerns so often invisible? As #Each for Equal encourages us to do, I want to “challenge stereotypes, fight bias, (and) broaden perceptions” by inviting us to courageously consider these questions and the benefits of including more voices in gender equity conversations.

Could it be that the lack of recognition of trans women’s experiences suggests a cultural bias that trans women are not real women? Granted, it is true that – especially for those of us who came out later in life – many of our experiences have been different from that of our cisgender sisters who have known both the blessings and curses of being raised as women. But the reason we went through all the challenges we have endured to live in this world as women is because we truly see ourselves the same way cisgender women see themselves – as women. We also experience the same inequities. For example, my trans sisters and I are subject to the same “image policing” experienced by all women. Since many of us do not fall within the range of what American culture considers “pretty”, believe me, this causes us as much distress as it causes our cis sisters!

Along with internal angst regarding body image, like cisgender women, we also experience the detrimental impact of “Pretty Privilege.” As Janet Mock writes:

People who are considered pretty are more likely to be hired, have higher salaries, and are less likely to be found guilty and are sentenced less harshly. Pretty people are perceived as smarter, healthier and more competent, and people treat pretty people better. Pretty privilege is also conditional and is not often extended to women who are trans, black and brown, disabled, older, and/or fat.

To add insult to injury, many trans women have testosterone stamped features that not only render us “not pretty”, but actually leave us outside the realm of what is considered “normal” for women. A deep voice, broad shoulders, large hands, receding hairline, large nose, prominent brow, Adam’s apple and/or greater height, gets many of us gawked at or ridiculed whenever we go out in public. While some of these things can be addressed by surgery, such procedures are considered “cosmetic” and therefore, are not covered – even by those companies’ health insurance plans that do offer transition-related benefits. Is this perceived lack of visual and auditory “normality” what keeps us on the outside of gender equity conversations?

Considering why trans women’s experiences are often neglected in gender equity initiatives certainly challenges stereotypes and broadens our perspectives. But a consideration of the benefits of including trans women’s concerns may be even more productive.

One significant benefit is that it allows our Women’s Movement to be a much-needed model of the radical diversity, equity and inclusion that we are calling on the world to embrace. Let’s face it, if we say we want equity for women, but aren’t including all women, it weakens our position. That’s why Janet Mock’s prophetic voice ringing out among the many calls to action at the 2017 Women’s March on Washington was a powerful demonstration that we truly are stronger together. Likewise, Laverne Cox’s inspiring keynote at the 2019 Simmons Leadership Conference prompted women to get up out of their seats, go to the mics, and ask how they could better support their transgender niece, their transitioning colleague and other gender diverse friends and family members.

Modeling radical diversity, equity and inclusion by making space for the voices of transgender women also builds numbers and momentum for our work. It causes others to sit up, take notice and join in. This was certainly true in the first trans affirming church I attended. Many times, I heard visitors say – after seeing the congregation’s ethnic diversity and watching my trans sisters and I serve as greeters, ushers and choir members – “Wow! You don’t just say you welcome everyone, you actually do it!” It was this “walking our talk” that caused many of those first-time visitors to become long-term members.

A third benefit of including the voices of trans women – along with women of varying gender identities and expressions, sexual orientations, shapes, sizes, religions, ethnicities, ages and abilities – is that it keeps us ever mindful of the dramatic ways in which intersectionality impacts equality. It is common knowledge that not only gender, but also ethnicity impacts a woman’s likelihood of being promoted to an executive level. But what happens when a different intersectionality, like gender identity or sexual orientation – is considered? A 2017 poll, developed by the Robert Wood Johnson Foundation and National Public Radio (NPR), revealed that six out of ten (61%) of lesbian, bisexual, trans and/or queer respondents had experienced discrimination around equal pay or being considered for promotions specifically because they are women, whereas four in ten (40%) of non-LBTQ women respondents had experienced these particular discriminations. This suggests that workplace equity for all women will only be achieved by considering the various intersections that impact some women. As researcher Ashlee Christoffersen writes, “The fundamental benefit of adopting an intersectional approach… is that it provides an understanding of the issues that is closer to the lived experiences of the equality groups that you are interested in, thus allowing you to develop effective strategies to address them.”

So, what might this intersectional approach and these effective strategies look like? How can we model, within our #EachforEqual and equity for all women initiatives, the radical diversity, equity and inclusion we want to see in the world? Here are three suggestions to promote equity for ALL women in your organization:

These are merely three suggestions on how we can expand the gender equity conversation to include many more voices. My colleagues at Transformation Journeys Worldwide and I would love to read your ideas, as well.