A conversation with Gabrielle Claiborne on gender equity and inclusion.

I recently read an article written by my colleague Gabrielle Claiborne that outlined the need to expand the gender equality conversation to include ALL women. As the founder and CEO of Transformation Journeys Worldwide, Gabrielle is an inclusion trainer and consultant. She noticed that she was often in spaces where gender equity was being discussed but felt that the conversation is limited to equity for cisgender women.

In her article, Expanding the Gender Equity Conversation to Include ALL Women, she wrote, “Where are the experiences of my transgender sisters in these conversations? Why are our concerns so often invisible? As #Each for Equal encourages us to do, I want to “challenge stereotypes, fight bias, (and) broaden perceptions” by inviting us to courageously consider these questions and the benefits of including more voices in gender equity conversations.” 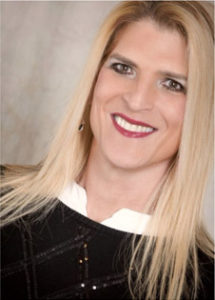 Last year, I interviewed Gabrielle to better understand the differences between gender identity, gender expression and sexual orientation and how to create inclusive work cultures. This month, I reached out to Gabrielle to get her perspective on broadening the gender equity conversation.

Jeffery: Tell me more about why we need to broaden the gender equity conversation?

Gabrielle: I have a colleague named Susan, whom I have never met in person. Our only contact has been via email, Zoom and phone calls, and I have checked out Susan’s LinkedIn profile. Susan has a feminine sounding voice and dresses fairly androgynously. If we worked together in a corporate setting, I have no doubt that most of our co-workers would assume Susan identifies as a woman, but they do not. Susan is non-binary. They do not want to be referred to as “she” or “her,” and they do not want to receive emails for members of the company’s Women’s ERG/BRG.

A new colleague of mine, Taylor, also dresses fairly androgynously from what I’ve seen in the Zoom meetings we’ve been in together. Taylor’s deep vocal register initially suggests they identify as a man. But Taylor does not. Taylor is a transgender woman. Taylor’s colleagues respectfully refer to her using feminine pronouns, and she always looks forward to attending virtual and in-person Women’s ERG/BRG events.

Realities such as these are becoming increasingly common. Today’s employees bring a wider variety of gender identities, gender expressions and sexual orientations to the workplace than ever before. Daily tracking by Gallup in 2017 revealed that a little more than 8 percent of US Millennials identify as LGBT. Similarly, a 2018 survey showed that 8.9 percent of Japanese citizens identify as LGBT. A 2018 Pew Survey showed that just over one in three US Gen Zers personally knew someone who uses gender-neutral pronouns, as do 25 percent of Millennials. In recognition of the growing reality of gender diversity, currently, 18 states and the District of Columbia allow their residents to choose an “X” gender marker on their driver’s licenses, along with the usual “M” or “F” options. Likewise, more than 10 countries across the world offer their citizens a third gender option on their passports, or allow them to self-identify their gender on various legal documents. Consequently, when we address the topic of workplace gender equity, we must speak to a broader concept of gender and sexuality than just the straight, cisgender woman’s experience.

If a company wants to be positioned to attract top talent, they must demonstrate to applicants that they take all facets of diversity very seriously — including diversity of sexual and gender identity — and that they are continually taking steps to create more equitable and inclusive environments. And the “top talent” I’m referencing here includes not only LGBTQ individuals themselves, but allies as well. This reality is evidenced by a global survey done by the Center for Talent Innovation showing that 77 percent of allies are more likely to accept a job at a company that is supportive of LGBT employees.

Jeffery: If a company’s non-discrimination policy states that it does not discriminate on the basis of gender, isn’t that all the company needs to say to be inclusive of persons of various sexual orientations and gender identities?

Gabrielle: Not necessarily. This month, the US Supreme Court will hand down a ruling on three cases determining whether or not sexual orientation and gender identity are included under the 1964 Title VII prohibition of workplace discrimination on the basis of sex. Regardless of how SCOTUS rules, it is imperative that companies explicitly spell out, in their policies, that they do not discriminate on the basis of sexual orientation, gender identity or gender expression. It is also critical that companies communicate this in their recruiting materials and on their websites. Such communication is needed to assure all applicants and employees, including persons of various sexual orientations, gender identities and gender expressions, that this particular company understands and respects gender and sexual identity diversity.

Obviously, such language will be needed to create an inclusive environment if a majority of the Supreme Court justices rule that sexual orientation and gender identity are not included under Title VII. However, even if SCOTUS rules in favor of inclusion, this language will still be critical, and in fact, perhaps even more necessary. If sexual orientation and gender identity are officially included under Title VII, then companies will have to say that they do not discriminate in these areas — without necessarily doing the hard work to create workplace cultures that truly are equitable and inclusive. Consequently, explicitly using these terms in policies and recruiting and marketing literature can be a way of tangibly demonstrating that the company is taking concrete steps to establish workplace gender equity.

Jeffery: What are other concrete steps companies can take to create gender equity — in this broader sense, as we’ve been discussing?

Gabrielle: Great question, Jeff! There are many things that companies can do — and are doing — starting with policies. Companies need to make sure their Gender Transition Guidelines are in place and that managers and HR personnel are trained in how to support an employee’s gender transition. If they have dress codes, those should be revised to be gender neutral. Company policies regarding email signatures can be updated to standardize the inclusion of pronouns. Organizations are also updating language in parental leave policies, replacing terms like father and mother with primary and secondary caregiver.

Insurance benefits also need to be reviewed through an LGBTQ lens. Because some LGBTQ couples choose not to marry — especially in states where a person can still be fired because of their sexual orientation or gender identity — it is important that companies continue to offer insurance coverage for domestic partners and their dependents. Transition-related medical benefits should also be offered to employees and their family members.

IT and operating systems need to be updated to accommodate a person’s chosen name without ever revealing their legal name. (Payroll and insurance are the only two places where a person’s legal name must appear.) Likewise, HR records must be able to accommodate an “X” or “U” (for unspecified) gender marker.

Consideration must also be given to providing gender neutral options and/or privacy options for restrooms, locker rooms, lactation rooms and changing rooms.

Of course, it is possible for companies to take all these important steps toward inclusion and still have a workforce that doesn’t know how to interact respectfully with LGBTQ people. This results in a company that looks good on paper — that may even score a 100 on the HRC Corporate Equality Index — but that doesn’t feel inclusive. That is why education is absolutely critical. Employees need to be reminded that when asked about their weekend, it’s as appropriate for a gay person to talk about an outing with their partner as it is for a straight person to recount what they did with their spouse. Such education could help change the reality that a little over one in three straight, cisgender workers feel uncomfortable hearing an LGBTQ colleague talk about dating. Likewise, given that a 2017 YouGov Survey revealed that one in five Americans believe that being transgender is a mental disorder, there is much workplace education that needs to take place to help co-workers both understand their trans and non-binary colleagues and know how to interact respectfully with us.

These are some of the many things companies can do to create more LGBTQ inclusive cultures. For more recommendations, download a free “Roadmap to Cultural Transformation.”

Jeffery: Thank you, Gabrielle. I appreciate your leadership to make equality for ALL a reality.

#Pride Month started earlier this week with limited fanfare given a national backdrop of a global pandemic raging along with #BlackLivesMatter. Yet this is a month to celebrate. To celebrate the lives (and sadly the tragic deaths) of early pioneers in the Pride movement. This month can provide the time to have genuine conversations about our differences. White/Black/Gay/Straight and a thousand others ways we are all unique. Are you ready to have that conversation?  Let’s use this moment to finally have conversations about equality irrespective of race, gender, sexual orientations, gender identities, gender expressions and religion.