Transgender Day of Remembrance (TDOR) is an international observance that occurs every November 20th. It is a time to honor the memory of those trans, gender nonconforming and non-binary people throughout the world who have been killed during the previous year.

This week, Gabrielle Claiborne, Transformation Journeys WW’s CEO, interviewed Dionne Kettl, an HR professional and our associate here at TJWW, during a fireside chat hosted by the PRIDE ERG at COX. Her insights about the pain of TDOR and what you can do about it were so meaningful that we wanted to share some of the highlights with you.

Gabrielle: Dionne, I know that here in the US, there have been at least 45 gender diverse people killed in the past 12 months, making this the deadliest year on record for our community. I also know that this year, as has been the case every year, the vast majority of those murder victims have been Black and Brown trans women. As a Black, biracial trans woman, what does TDOR mean to you?

Dionne: For me, TDOR is bittersweet. The sweetness comes from the fact that this annual observance does bring visibility to our community. It is one of the most well-known events, throughout the world, that is related to trans and non-binary people.

The bitterness, obviously, comes from the fact that this much needed visibility comes at the cost and the loss of our trans and non-binary siblings, specifically Black and Brown trans women. Year after year, the individuals on this list represent a disproportionately high number of an underserved and heavily marginalized community. That in itself is an alarming reality, but equally sad is the fact that, if we didn’t have this day to highlight their murders, many of these victims’ deaths would go largely unnoticed, even by their families.

Gabrielle: Dionne, help us understand why so many of the names we’ll call on TDOR are the names of Black and Brown trans women. 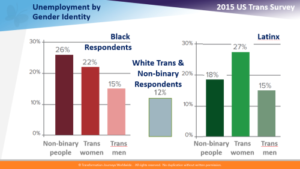 Not being able to find employment or being underemployed—another challenge experienced by gender diverse people—results in unstable living situations and/or homelessness. I have personally experienced both as a result of losing jobs where I was getting solid performance reviews, but my employers saw my gender diversity as a liability. When we don’t have a job and secure housing, many Black and Brown trans women end up in situations where violence is prevalent. Some even have to resort to working in the underground economy, (prostitution, drugs, etc.) certainly not because they want to, but just to survive. This can result in arrests on their records, creating another barrier to employment.

Gabrielle: Can you highlight some things allies and advocates can do to help remove these barriers to employment for our Black and Brown trans sisters?

Dionne: One thing you can do is to push for implementation of “ban the box” in your workplace, if you work in a space where it is not already in effect. Ban-the-box policies provide applicants a fair chance at employment by removing conviction and arrest history questions from job applications and delaying background checks until later in the hiring process.

Also, help your talent acquisition team or hiring managers understand other barriers to employment for gender diverse individuals and how to get around these roadblocks. For example, some of your trans and non-binary job applicants may be in the process of changing their legal names and/or gender markers. It’s important that those doing the hiring be sensitive to this reality, and not be thrown off by an interviewee who presents differently than was expected, based on a name or gender marker in their application.

Likewise, changing one’s legal name can seriously impact one’s credit record. I have colleagues who have spent months, even years trying to get their credit history sorted out after they changed their names. This can create a flag on their credit record which shows up during the background check phase of the hiring process. Again, making those doing the hiring aware of this possibility and encouraging them to ask questions about a credit flag instead of simply rejecting that applicant can make a real difference for applicants who are trans or non-binary.

Allies can also volunteer to mentor gender diverse colleagues. Better yet, become our sponsor, and put our names forward when promotions are being considered. Too often Black and Brown trans woman are hired into entry level positions to fill DEI goals, but then we’re not given the opportunity to advance. Again, this is something I have personally experienced. My first full-time job, which I landed in 2013, was with a large international bank. Through hard work and being bilingual in English and Spanish, I soon ranked #1 in sales for the district, #3 in sales for the region and #6 on the East Coast. People with similar rankings were quickly promoted, but I was not, despite interviewing over 40 times within the span of three months. This is why I always stress the important role our allies can play by not only mentoring, but also sponsoring Black and Brown trans colleagues.

Gabrielle: Dionne, thank you for sharing so openly from your own personal experiences and so insightfully from your vast knowledge as an HR professional. You’ve certainly given all of us some action steps we can take to lessen the bitterness of Transgender Day of Remembrance and create a much brighter future for Black and Brown trans women.

To learn more about how you can advocate for gender diverse people as an HR, DEI or ERG leader, or as a manager or recruiter, contact us at TJWW and/or scroll through the trainings and presentations we have designed specifically for you and your team.